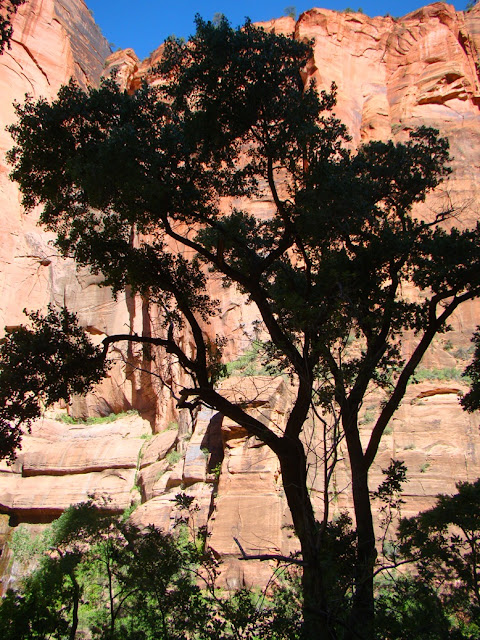 I bet no one has ever thought to take pictures of this place before! Or not. The Gateway to the Narrows trail is only the most popular trail in one of the most visited national parks in the system. I often try to describe places off the beaten path, but sometimes it's fun to catch these popular spots and be reminded why they are so famous in the first place.

Zion National Park is the ultimate exposure of the dramatic Navajo Sandstone, which formed in early Jurassic time as a widespread "sea" of sand dunes extending from Wyoming to Arizona and Nevada. The formation is more than 2,000 feet thick at Zion, where it forms vertical red and white cliffs.

The cliffs have been exposed by the rapid incision of the region by the forks of the Virgin River. Where the river has reached the underlying Kayenta Formation, mass wasting and erosion has caused rapid cliff retreat, forming a wider valley with a flat floor that allows for the development of tourist facilities (the campgrounds and visitor centers and such). Things change at the upper end of the valley where the river is flowing exclusively in the Navajo Sandstone. The canyon is 2,000 feet deep, but in places is only a few feet wide. The Narrows of the Virgin River is a stunningly beautiful place.

At road's end at the Temple of Sinewava, an easy 1 mile paved trail provides access to the narrows. That's where I was the other day. It is one of the more crowded spots in the park, but the mess is mitigated somewhat by the wise decision of the park service a decade or so ago to ban cars from the upper canyon. Today, the only engine noise comes from a tram every ten minutes or so. The hikers jump out, disperse, and it is quiet again. 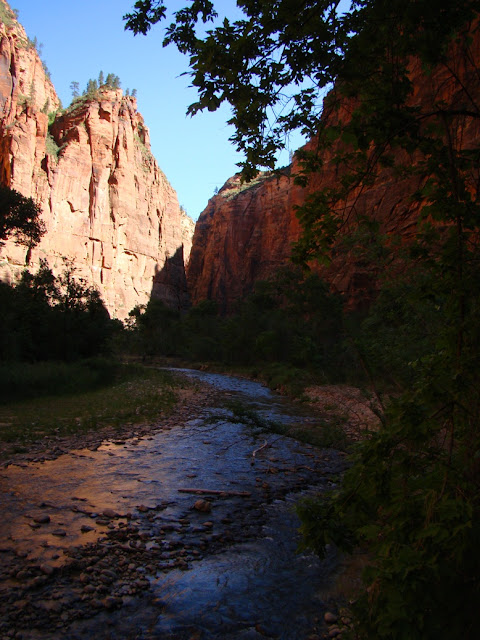 When the lower canyon is stewing in the desert heat, the Gateway is cool and shady (no wonder it is popular). Water seems to be everywhere, in the river itself, and dripping out of the canyon walls. The Navajo Sandstone is quite permeable, but the underlying Kayenta Formation is not. Springs are often found at the contact between the two, such as at the "swamp" (our friends on the trip from the southeastern states probably snickered a bit about the name; at least we didn't have to worry about crocodiles...). 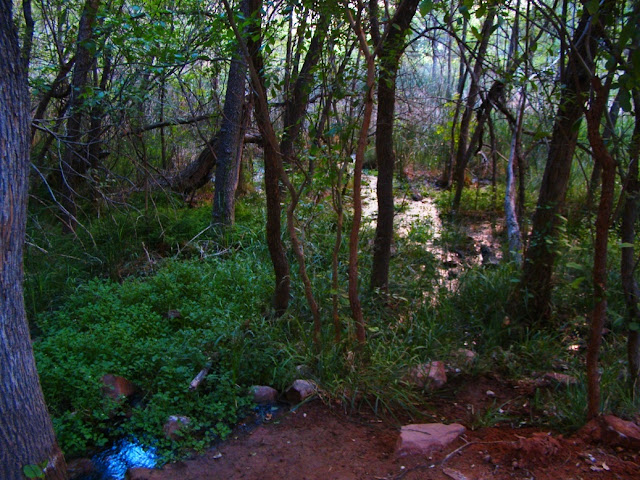 The lush greenery attracts plenty of animals, including a national park deer (i.e., they graze right next to the trail and pose for pictures). 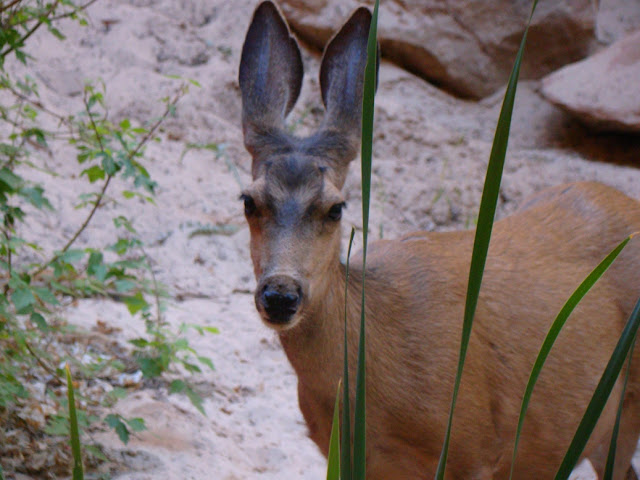 The springs emerging from joints in the rock produce beautiful hanging gardens with flowers of all kinds. 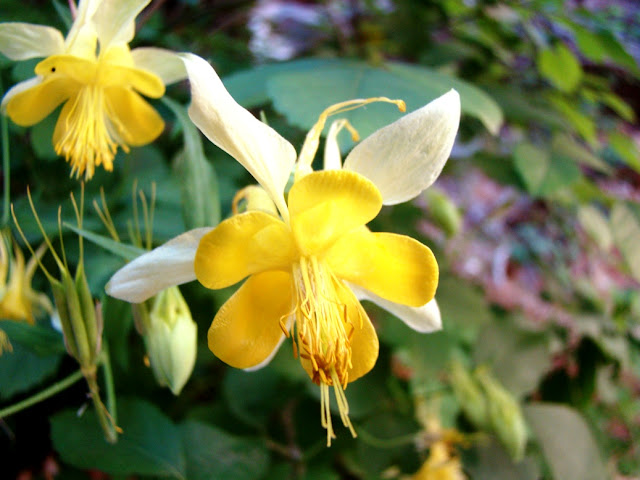 The columbines are my perennial favorites... 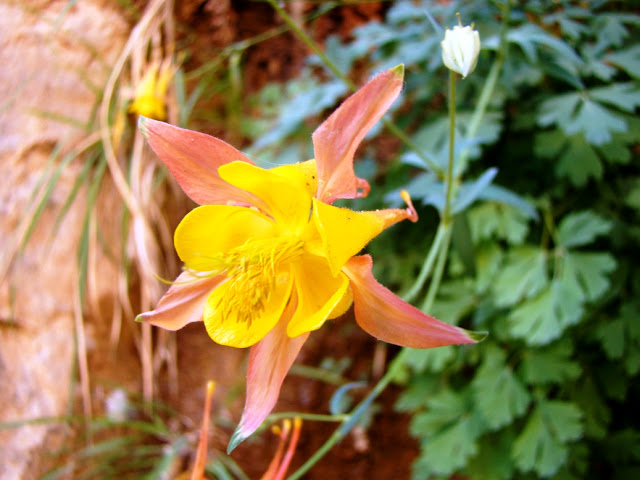 As the sun climbs higher in the sky, the walls of the canyon are reflected off the Virgin River. 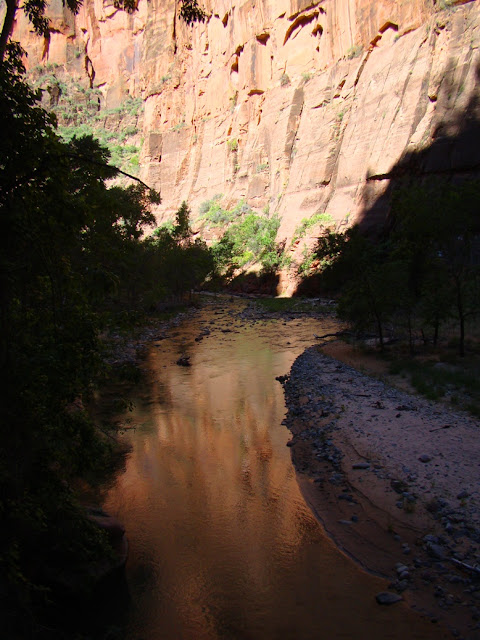 For all the crowds, it is a beautiful and serene place.The paved trail ends at the entrance to the Narrows of the Virgin River. One can don some water shoes and explore upstream for miles. Or take a road to the isolated north end of the park and backpack downstream through the narrows. Or one can just sit somewhere and listen to the river and the birds. 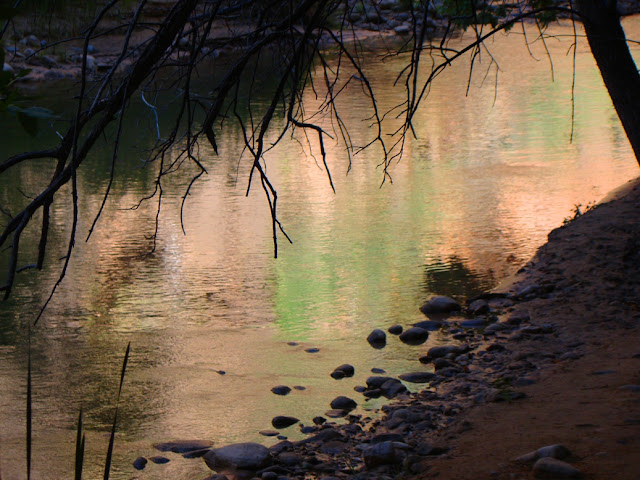 More on Zion in the next post!
Posted by Garry Hayes at 10:12 PM

I need to walk the narrows again. Once out of site from the end of the trail the crowd peters out.