The Return of the Airliner Chronicles! The San Andreas Fault in San Francisco

I love flying. Well, I don't like airports. Or security lines. Or airliner food. Or uncontrollably crying babies (though I have sympathy for the poor parents sometimes). Or the incredibly small seats. Or the lack of foot room. Or looking for lost baggage. Or airport shuttles. I don't like all of that stuff.

But put me in a window seat on a clear day, and a route over a geologically interesting place, and I will be deliriously happy. I will easily snap dozens of pictures when conditions are right. The Airliner Chronicles was my first idea for a blog series, and I abandoned it for a few years only because I haven't flown anywhere since 2009. But I flew this holiday vacation, so I am pleased to return to the Chronicles once again. 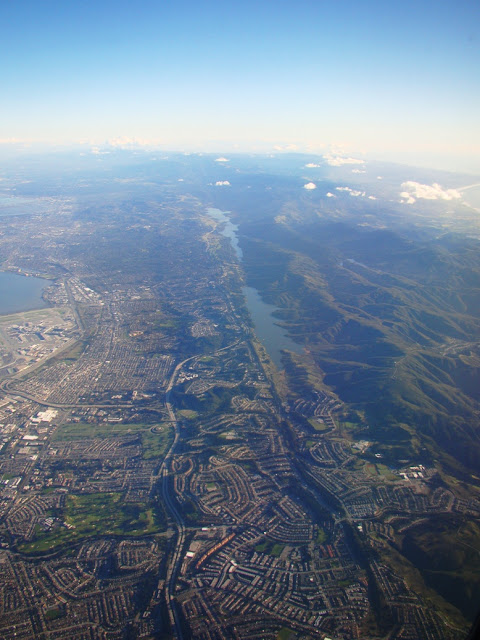 I usually fly out of San Francisco, but it has been rare that I have had a clear view of the San Andreas fault in the Bay Area. On this flight, I almost felt the pilot knew I was on the left side, and that I wanted as many sight angles on the fault as possible, so he or she banked us nicely for four perspectives of the San Andreas fault as it runs from the hills above San Jose to the sea at Daly City near San Francisco. 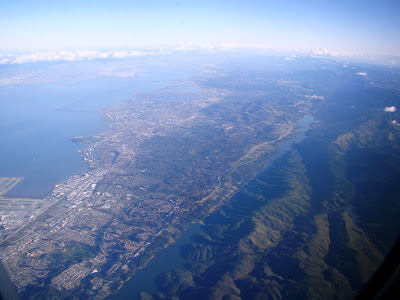 Have you ever wondered how the San Andreas fault got its name? In 1895, U.C. Berkeley professor Andrew C. Lawson mapped a fault in the Bay Area that crossed San Andreas Lake/Reservoir (which is at the bottom of the first three photos; the other lake is Crystal Springs Reservoir). The 1906 San Francisco Earthquake made it clear that the fault was a much larger feature (200 miles fractured in 1906, but the fault extends some 600 miles to the Salton Sea area in Southern California).

The dam that holds back San Andreas Reservoir was damaged in the 1906 event, but the dam held. The west side of the fault (right side in the photo above) lurched about 9 feet northwest during the quake. Faults that move sideways like this are called strike-slip faults, and if the side of the fault opposite the observer moves to the right, it is a right-lateral strike-slip fault. The San Andreas is this type of fault. 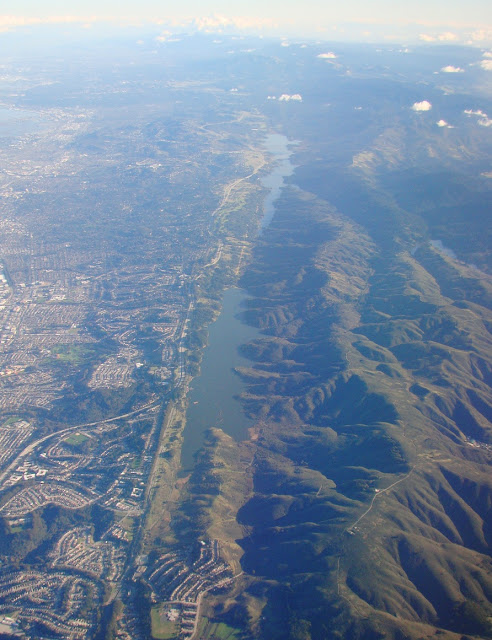 Even more importantly, the San Andreas fault is a transform boundary, marking the spot where the Pacific Plate is moving northwest relative to the North American Plate (or the Sierra Nevada Microplate if you want to be really specific). The fault has been moving for nearly 30 million years, and has shifted 200 miles or more (roughly 2 inches per year). It would be more correct to say that the fault would shift 2 inches per year, but friction holds the sides of the fault in place until enough stress has built up (a century or two) that the fault breaks and moves 10-20 feet all at once in a large earthquake like the one in 1906. 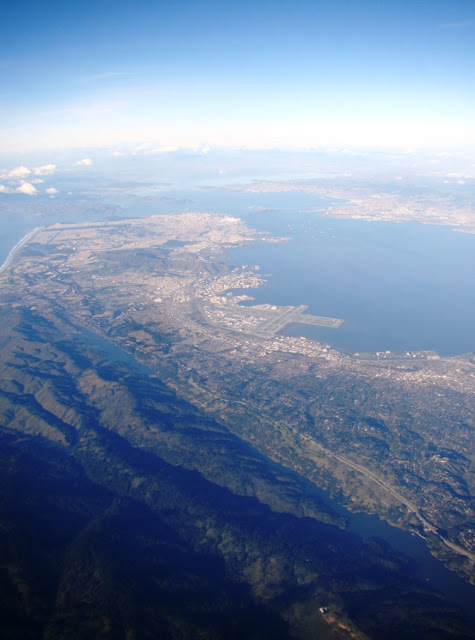 We banked one more time and had a wonderful look at the entire San Francisco Peninsula before heading east towards the Sierra Nevada...
Posted by Garry Hayes at 8:35 PM

Nice shots of the fault.

I love flying, but don't like all the other things either. I always want to know what I'm flying over and wish their was a better map or info.

I waited years for a similar moment flying out of SFO.

I wonder if it shifts 10-20 feet would it theoretically be making the state of Cali, larger(wider) in some sense. Wondering what happens if the shift is a magnitude of 10-20 feet say 200 with cracking of the micro plate perhaps long term makes it more stable since tension would be reduced