The Saturday Musings of an Easily Distracted (Geo)Blogger... 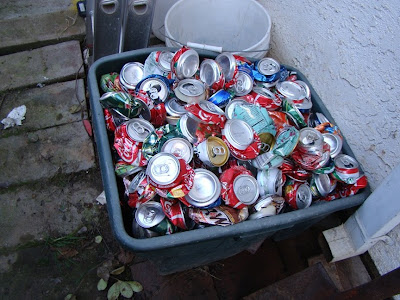 The visual evidence of why my "beer" belly doesn't go away... 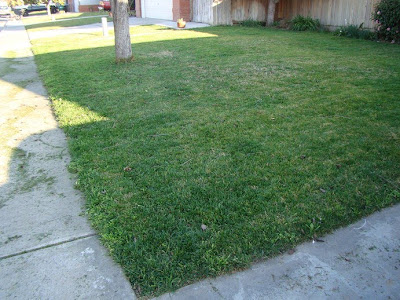 A fear of carnivores??
You may think that the life of a geoblogger is fascinating and exciting, given their tales of derring-do and exotic travels, but the truth in my case is far more mundane. I still have to do the yard work and take out the garbage; "but honey, I had 300 page hits yesterday..." doesn't cut it as an excuse to sit on the couch all day writing stuff. I was encouraged to "get some fresh air" and some "exercise", so I found myself mowing the lawn.

This short post is actually about the thought processes that go into writing blog entries. I forget to hook up my MP3 player (by now about MP1.5; it's a little beat up), so nothing was flooding my brain with musical stimuli while I was working. It was just my brain and me, doing menial labor, and more menial labor than I meant to do. It was fascinating to watch my brain at work.

First off was the problem-solving that had to take place. It's February, for heaven's sake, so the lawnmower had become buried in the far reaches of the garage, behind the Christmas decorations somewhere. There were some big empty boxes that had to be disposed of, torn up and tossed in the recycle barrel. I got that done, and opened the door to the sideyard and realized that the aluminum can bins were filled to overflowing, and blocking the path. Isn't someone in charge of crushing the cans? Oh yeah, the kids moved out. That's my job now. So there came a half hour of stomping on somewhere around 400 cans.

The path was finally cleared, and I got the mower out on the lawn, and twenty minutes later the job was done. And along the way I discovered something of how blog ideas are generated. Three or four of them just popped right out as I worked.

What the heck was I doing mowing the lawn in February? The grass was growing, that's why. I know it is hard for my friends and readers shivering in the snow across the northern hemisphere to comprehend this, but it has been two weeks or so of sunny weather and temperatures in the 60's and 70's. But still, February is early. I used to be able to wait until the first week of March. So it struck me how early things are happening. Blossoms are starting to appear on some of the trees in the orchards, and (ominously) on the trees in my backyard (that means lots more work this weekend trimming trees). There is a lot of hot air about whether global warming is happening or not, but here is an example on our own doorstep.

Why do we have to have lawns anyway? We have a real problem in California and across the west. We have something worse than a drought; we have a structural drought, which means there isn't enough water to meet demand even in years of normal precipitation. And what do we use most of the water on? Lawns. During the summer months we pour the equivalent of tropical amounts of monsoonal precipitation on lawns that most of use don't use for anything (I play with the dog out back, but no one sets up a barbecue and lawn chairs on the front lawn anymore). Lawns just sit there and don't do anything. I remember reading somewhere that our ancestors liked open prairie because we could see the predators that wanted to eat us with enough time to start running. Any thoughts on that, my anthro friends? I live in a near-desert; I really should be thinking about xeriscaping or growing more of my own food...

Does anyone stop to think what a miracle of engineering an aluminum can represents? I spent quite a bit of can-stomping time ruminating on the interaction that could have taken place a thousand years ago: handing a can to a Native American, or a serf in Middle Ages Europe. They had iron and glass or ceramics, of course, but those were heavy or easily broken. A practically weightless holder of liquids! It would have been a miracle; almost as amazing as a plastic water bottle would have been. Yet we use these things once and toss them out. Sometimes we get socially responsible about it and toss them in the recycle bin, but every iteration of recycling still uses a tremendous amount of energy, and I have my doubts that the stuff in the recycling actually gets re-used (disposal companies are welcome to respond to that accusation). We can do better than this...

What am I doing here at home? I should be on the road! Thankfully this sad situation will change in a few days as I and 25-30 students hit the road later this week on our way to Death Valley National Park and the Mojave Desert. Look for something more to look at on this blog than aluminum cans and mowed lawns.
Posted by Garry Hayes at 4:20 PM

Sometimes it is just a slow blog week and so we write about lawns and aluminum cans. And soon we get out on the road and geologize!

Possibly entirely off topic but....

I fully support growing your own food! It's way more delicious than the grocery store, way cheaper, and it's fun, unless you don't enjoy yard work. Also, urban chickens! I don't know what the bylaws are in your city, but in mine we're allowed to have 6 chickens per house (no roosters though). They're great for turning your kitchen veggies scraps into delicious eggs! Chickens are also nature's rototillers, so you can save yourself some hard work turning over the soil.

Oh, Meg, not off topic at all! We grow some modest "crops" in the backyard where the sun is better, but the front yard is going to waste in a way!

I had a prof who talked about how he was trying to take a more natural (or maybe lazy) approach to landscaping. He had one sprinkler in the center of his yard, and he only planted grass in a circle around the sprinkler. The outside areas were covered in rock. Turns out, his neighbors didn't like this and complained a lot. One time, someone said they had a great rock that would go nicely in the 'rock garden'. It was a huge boulder. He said, after he got that, his neighbors started being nice to him. He realized that the rock was at the top of the hill and would roll downhill into their yards/houses if it would be nudged a little too far. :-)

I can't believe we're thawing here, and it's not even the middle of February. Seems very wrong.

I'm considering reseeding my lawn with eco-lawn seed from wildflower farms. And then, maybe, I might get a manual lawn mower.

And we need grassy lawns why?