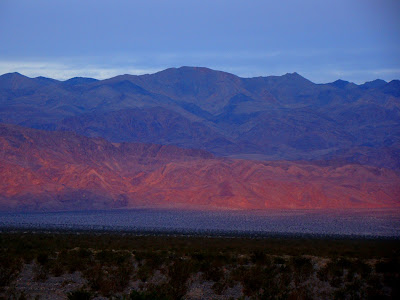 Day dawns on the Cottonwood Mountains west of Stovepipe Wells. We've got about 400 miles to reach home, but we weren't going to let that stop us from doing a few last minute stops at Death Valley National Park. We've spent three days exploring the region (here, here and here), successfully avoiding the worst of California's storms this last weekend, and seeing some wonderful geology.

Tucki Mountain is an immense edifice rising 8,000 above our camp at Stovepipe Wells at sea level. The shape of the mountain is reminiscent of a turtleback fault, and it may in fact be an incompletely exposed metamorphic core complex (I would love to hear from the structural geologists about it). Mosaic Canyon is a deep gorge on the north flank that narrows down to a twisting labyrinth in its lower reaches. It is a main tourist stop, but most visitors never notice the spectacularly exposed structural features. 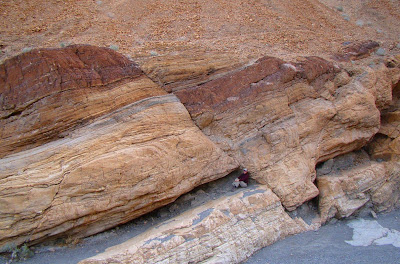 Just a short distance up the canyon from the parking lot is one of the best exposed examples of a normal fault I can imagine. Laura is resting her back on the headwall and sitting, more or less, on the footwall. The different colored layers show that the headwall dropped relative to the footwall, indicating extensional stress. 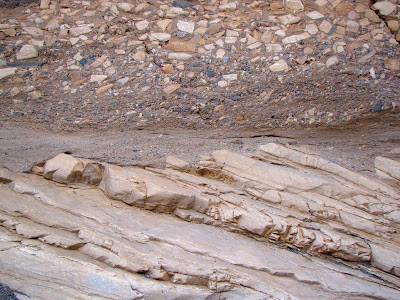 A little further up the canyon, the so-called 'mosaics' appear, chunks and pieces of canyon alluvium that were lithified, glued to the canyon walls, and exposed by continued downward erosion of the canyon. The photo above would serve as a perfect example of the appearance of an angular unconformity (a buried erosion surface with tilted rocks beneath and horizontal layers above), although the specific relationships here stretch the definition a little bit. 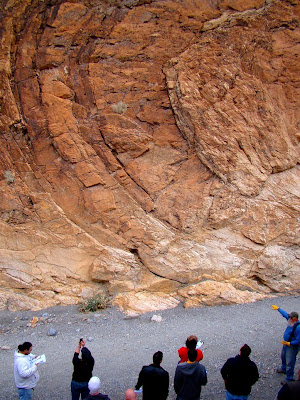 Paul was describing a large recumbent fold in the upper part of the narrows. These rocks have undergone an astounding amount of deformation, having been twisted into tight folds multiple times. 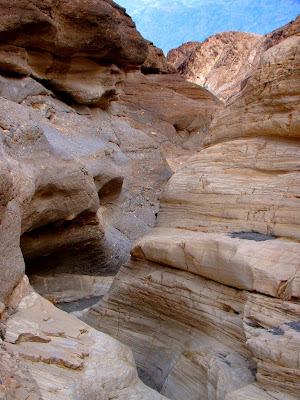 We made our way down the canyon for one last restroom break and chance for curios and t-shirts, and starting winding our way up into the Panamint Mountains for a last look at the valley. The road down the Mosaic Canyon fan provided a marvelous view of the Death Valley Dunes (Mesquite Dunes). Contrary to many people's stereotypes about deserts, dunes are a relatively rare part of the landscape in a place like Death Valley. Powerful winds blow the sands off the alluvial fans and down the long valleys until some flank of a mountain range interrupts the flow of the wind. The sand is deposited and shifts back and forth in the wind eddies. The highest of the dunes reach 150 feet or so. They are especially fascinating at night and in the twilight hours. In the morning the surfaces are covered by trackways of insects and animals. Most people don't realize they have seen the dunes; they were a stand-in for the Star Wars planet of Tantooine (the Dante's View panorama of Death Valley was used for the setting of Mos Eisley). 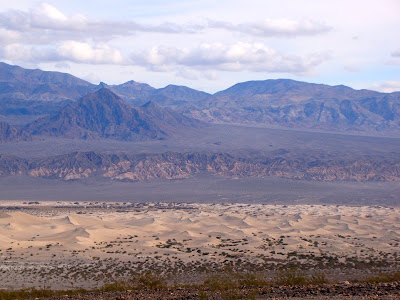 The interruption of the fan in the far distance is the trace of the Furnace Creek fault, a strike-slip fault that follows the base of the Funeral Mountains on the skyline. Death Valley hasn't been historically active as far as earthquakes go, but there are many signs that the faults are quite active. 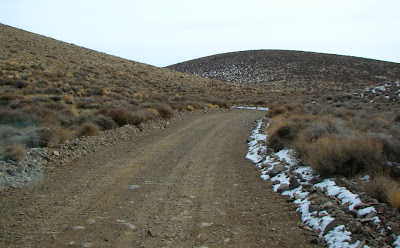 We drove up the gravel road to Aguereberry Point. The gentle rolling landscape gave little indication of the jagged cliffs just over the ridgetop. These hills give some indication of the topography of the region prior to the formation of the deep fault grabens of Death Valley and Panamint Valley. They were preserved as the mountains rose and valley collapsed, but in the fullness of geologic time, the hills will be breached by headward erosion and will disappear. 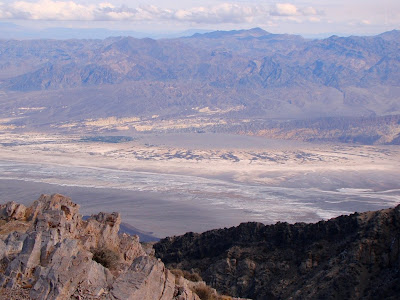 We topped the ridge at 6,000 feet and arrived at Aguereberry Point. Being at the end of a gravel road, it receives far fewer visitors than Dante's View, but it is no less spectacular. One stands beneath the flank of 11,049 foot Telescope Peak, and has a sweeping 270 degree view of Death Valley, the Panamint Mountains, the Inyo Mountains, and the Sierra Nevada in the far distance. At our feet was the massive alluvial fan of Furnace Creek, the location of many of the park's tourist facilities. 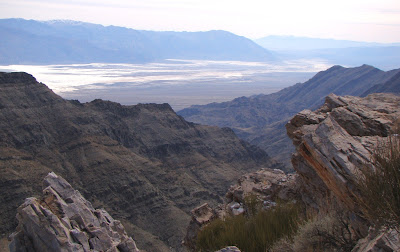 The salt flats of Badwater and the Black Mountains fill the view to the southeast. In the foreground are tilted Paleozoic sediments, carbonates and sandstones that were deposited in shallow seas, but ultimately accumulated to depths of many thousands of feet. We were standing on quartzite that was once a beach in Cambrian time 500 million years ago. We could see the burrows made by countless worms in the tropical climate. 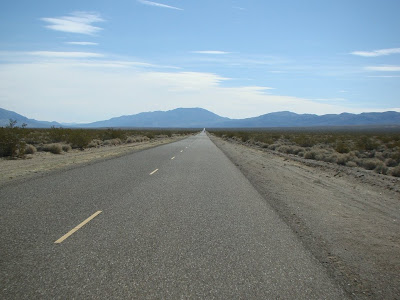 Finally the last geology stop was complete, and we hit the long road home, via Trona, Ridgecrest, Bakersfield and Fresno. It was a good trip! I hope you've enjoyed the virtual tour.
Posted by Garry Hayes at 5:15 PM

Loved it! I've been to all of those Death Valley spots on one trip or another. It's a shame you don't have time to take them down Titus Canyon, or up to Ubehebe, or down to the Racetrack, but then I suppose you need at least a week to really do justice to DVNP alone...

I hope your students realize how lucky they are to be able to see all this on an extended weekend field trip. Oh, to live and teach in California!

Mosaic Canyon was my favorite. You definitely needed more time. But thanks for sharing what you did get.

Loved these posts so much!! I've been to many of the places you visited but not all - it makes me remember my very first trip there as a student. Breathtaking! DV is my field area for my thesis so I have a lot of fondness for the area. I'm taking my partner there for the first time in March and your posts have gotten me so excited about the trip!

One question - how did you get internet access? I know they have wireless at the visitor's center, but I didn't think you were returning there each night, were you?

Stovepipe Wells Resort has a free wi-fi hotspot in the lobby-tv lounge area. Seems somehow wrong to have internet access when you can't even make a cell call, but I'll take it...especially when storms are erupting all around us and I need to see a weather radar!