My Beautiful California: A Day on the Marin Headlands 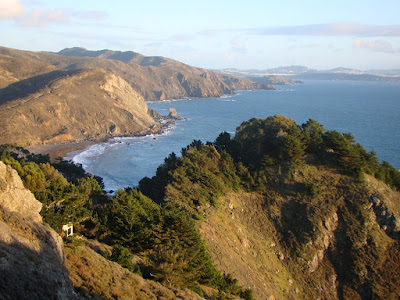 I have spent a lot of time writing about the "Other California", the places in my state that don't always appear on the postcards. I am always hoping to make folks aware of the riches our state has to offer when one gets off the beaten path, but I find that sometimes I like to go where everyone else goes, because, let's face it, California is a spectacular place. Today was one of those times, as I found myself on Highway 1 in the late afternoon exploring the Marin Headlands and Mt. Tamalpais State Park (the Headlands are part of the Golden Gate National Recreation Area). These are the rugged mountains and coast at the north end of the Golden Gate Bridge outside of San Francisco. 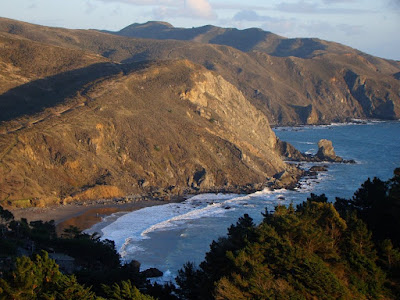 This beautiful stretch of coast is composed of the rocks of the Franciscan Complex, a chaotic mix of deep sea sands and muds, fragments of ocean crust and mantle, and even the occasional limestone reef deposit. The rocks formed in the trench of a subduction zone that lay off the coast of California in the time of the dinosaurs. The subduction zone is long gone, but the geologic violence that contributed to their origin continues in the lateral movement of the San Andreas fault which passes a short distance offshore. Large earthquakes like the one that devastated San Francisco in 1906 (close to magnitude 8) can tear the fault over a distance of 200 miles, and shift the crust 10-20 feet over much of that distance. The quakes occur every 100-150 years or so (do the math...).
The San Andreas has been active for more than 20 million years, and in that time has transported a wide swath of California and Baja California northward some 200 miles. Part of the evidence can be seen in the gratuitous sunset picture below, as one can pick out some small islands on the horizon. These are the Farallon Islands, which are composed of granitic rock related to the Sierra Nevada batholith exposed far to the south. The small islands are an important bird rookery, and the only human inhabitants are a few biology researchers. 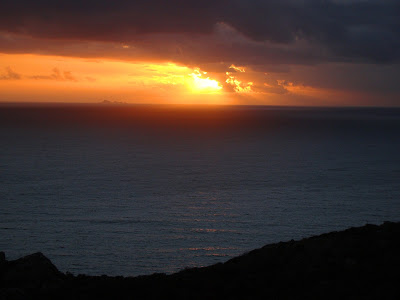 The storm that threatened to wash out our field trip yesterday (but conveniently waited until the evening to let loose) cleaned up the sky and the gave us a beautiful sunset. 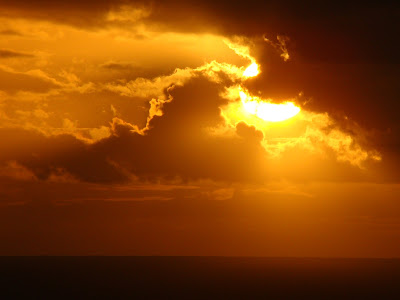 Before heading out for dinner, we stopped briefly on a ridge over the Golden Gate Bridge, and took in one of the most beautiful of all cities, San Francisco. It was a beautiful evening! 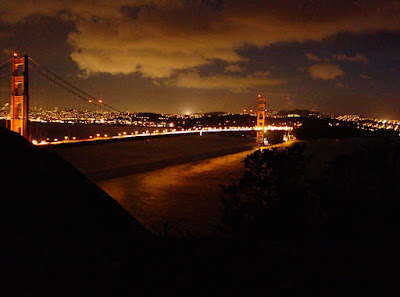 Thanks Garry, that sunset pic brought back memories of several pics I took while living on Maui. Sunsets have such a magical way of making a chaotic day seem to disappear, allowing one to sit back and just say "ahhhh".

Thanks for the post, Garry. It's always interesting to learn more about CA geology, in this case the Franciscan complex. Lovely pix!

Thanks Nina! I greatly enjoyed reading about Katmai and Alaska this summer on your blog: http://geo-travels.blogspot.com/

How long has the water from the San Fransisco Bay flowed into the Pacific through the Golden Gate.