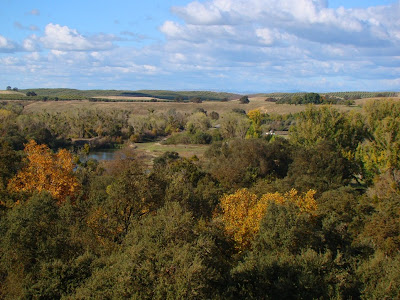 One of the things I love about geology is the path it provides for traveling in a time machine. As a kid, I sooo wanted to walk around during dinosaur times to see what they really looked like (these were the days before "Jurassic Park"). Training in geology gave me the ability to do just that, in my mind anyway. It is such a powerful experience to uncover a dinosaur bone (or any fossil, for that matter), and visualize an animal's life and the land it lived on, however far removed the landscape today is removed from that time.

Rocks tell the same story. Mention Yosemite or the Sierra Nevada, and one might visualize high granite peaks, deep glacier-cut valleys, and pristine alpine lakes. But in the Sierra foothills, the rocks tell a much different story, one that is far older. I took another afternoon drive looking for fall colors (still just getting started at the lower elevations), and found myself on the Tuolumne River near the old gold mining village of La Grange. There is a nice roadcut just north of the river exposing crossbedding river channel deposits from Eocene time revealing a very different landscape. The rocks are termed the Ione formation.

The gravels, sands and clays of the Ione were deposited in a distinctly different environment. The sand was deposited along a beach strand, the clays (and associated lignite deposits) in coastal estuaries and swamps, and the gravels in large rivers flowing into the coastal complex. Fossils in the Ione indicate tropical species. The Sierra of 40-50 million years ago was a coastal jungle, not unlike the coast of the Yucatan Peninsula of Mexico today! The mountains we call the Sierra Nevada were quite possibly not present at all beyond a few low hills. Many of the rivers, in fact, had their headwaters in central Nevada or further afield. 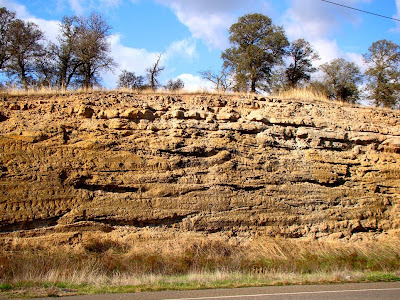 On another stretch of the highway, there are roadcuts of white and tan deposits of volcanic ash. These belong to the Miocene Valley Springs formation, rhyolite ash deposits formed during violent caldera eruptions around 22-28 million years ago. Some of the ash deposits had their source near the present Sierra Crest, but some may have come from central or eastern Nevada. Again, the Sierra would not have resembled the mountains we see today, and instead might have resembled the Cascades, with active stratovolcanoes and cinder cones.

The thicker sections of ash tuff of the Valley Springs turned out to be excellent building stone, and some of the more durable Gold Rush era buildings have walls of volcanic rock. It certainly worked better in the early towns than wood, which tended to burn down... 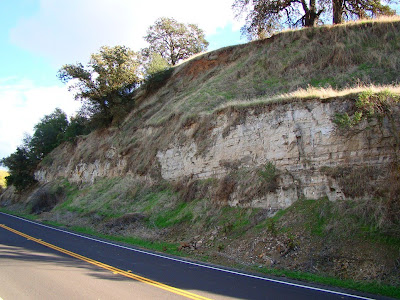 Some aluminum tags caught my eye when I was snapping pictures of the Valley Springs outcrop. Someone is doing some detailed research here! Cores had been taken every couple of inches. I'd love to hear what you are up to, if you happen to be the one doing the work. 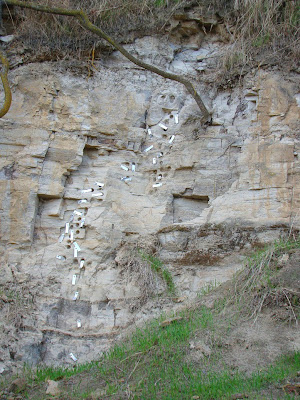 I wasn't a dino kid, but the more I learn about geology the more fascinated I am. Wanting to put more of the story together. Then there's the fossils.

Hope you find the researcher.

Your comment about seeing what those times really looked like reminds me of a short-story I read once (back in the 1980's) about someone who really could see a different geologic time--they were able to compare with geologic maps to work out when it was that was visible to their eye. Alas, that was before I took my first geology class. I'd love to go back and read it again, if I can only figure out where to find it. Ah well, since you reminded me of it I've asked on my blog, perhaps someone will know what I'm talking about.

Another great blog post. Love to see anything Sierra Nevada.

I know that first roadcut well! The country south of La Grange is beautiful too, with tombstone slates, old sluice trenches and nice views in all directions.

For more information about the middle Eocene Ione Formation, western slopes of California's Sierra Nevada, see the web page--Fossil Plants Of The Ione Basin, California, over at http://inyo.coffeecup.com/site/ione/ioneproject.html .